Over the past summer TEMSCO Helicopter’s 214B1, operated in Oregon, bouncing around to a variety of different fires around the state.  The majority of flying the 214 is spent providing water bucket support for actively burning fires.  The 214 has an external cargo maximum weight capacity of 8000 lbs and an internal max gross of less then 3000 lbs.  Given this profile it makes more sense to provide fire support in the way of external cargo operations.  We operated out of Santiam Junction Airport and worked on a fire located in and around the Mount Jefferson Wilderness called the White Water Fire.  Wilderness areas rarely approve the application of retardant for fire suppression, which eliminates the use of large air tankers resulting in a busy heli-base.  Due to the lack of infrastructure and rough terrain, there were very few ground contacts and fire crews for us to work with.  Helicopters were mainly left to drop water on the edge of areas of concern, in hopes of slowing the fires progression until a fire crew could secure the fire line.  The Wilderness areas are particularly beautiful around Oregon with lots of deep blue lakes we can use to refill our water buckets.  Often times, we’d be sharing water sources with hikers along the PCT (Pacific Crest Trail) that were enjoying an afternoon swim.  It’s fun to watch as their curiosity develops and they venture closer and closer to our dip site.  I always thought it would be a captivating experience from their perspective.

As the summer continued, the 214 was moved to the Columbia River and we worked on the Eagle Creek and Indian River Fires.  Due to these fires threatening communities, homes, structures thus the amount of resources on the ground and in the air, the flying environment was much more intense.  We worked along Interstate 84 in conjunction with many other helicopters and air tankers to provide suppression.  The fire was mainly wind driven, and that in combination with the low humidity and high temperatures made for extreme fire conditions.  Controlling the fires advancement and direction were our priorities with structure protection being the main focus.  Navigating between the water source and targets was very challenging with the low visibility and numerous other aircraft working the same areas.  It’s impressive getting such a firsthand perspective at fire’s destructive nature.  When the tree you are preparing to drop water on flares up into a ball of flame and you get a sudden burst of heat that leaves you instantly wondering how’s that water bucket doing a couple hundred feet below?…Better keep moving!!! 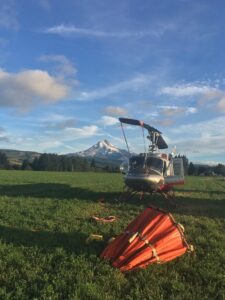 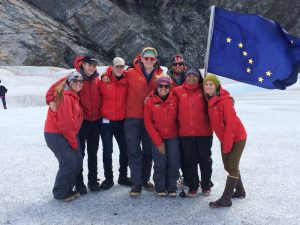